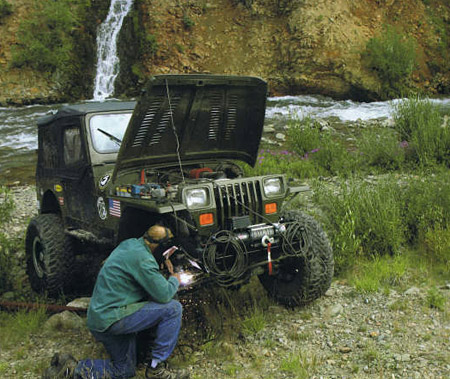 The Premier Power Welder on-board welding unit allows instant fixes on a remote trail, on the farm or on the construction site. The unit is a must for
4x4 travelers who like to get out on remote trail runs! 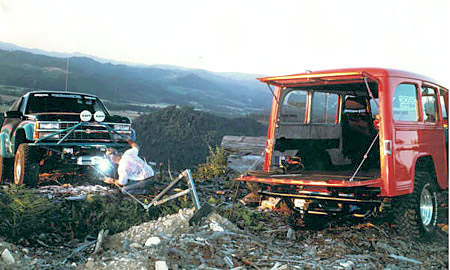 Some of you might remember this twin-turbocharged 1957 Willys Wagon  that was Duane Elliott's project vehicle for Off-Road Magazine. A Premier Power Welder is mounted in the rear of this 750HP propane-powered beast! 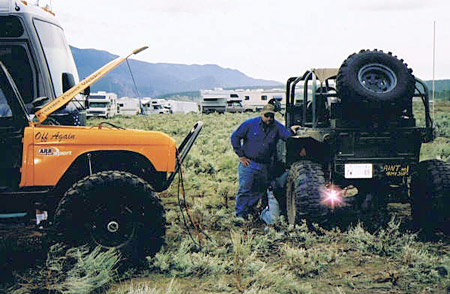 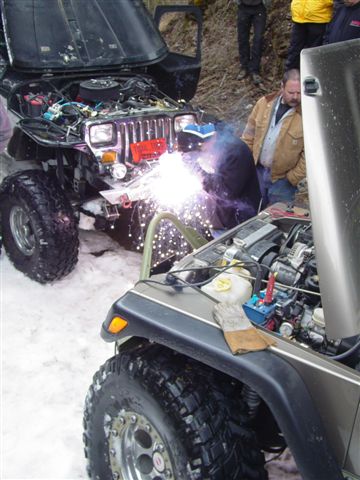 Premier Power Welder to the rescue! 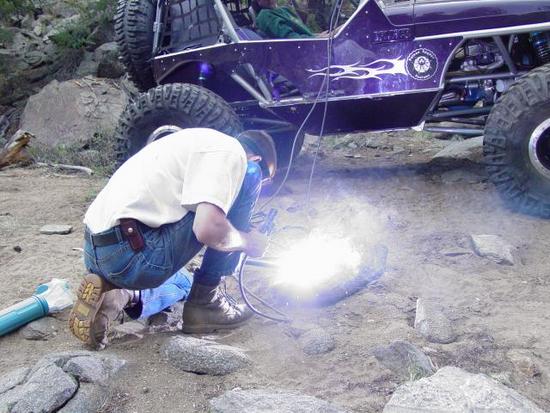 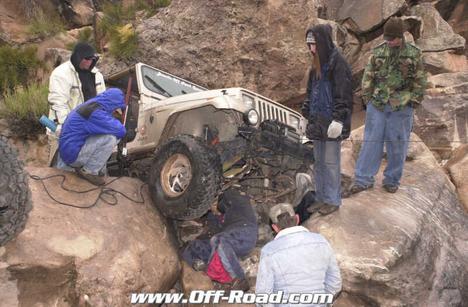 Moab, Utah, is know for its rugged metal-breaking rocks and trails. Here is a Premier Power Welder saving this Jeeps weeked dugin an on-the-trail fix. 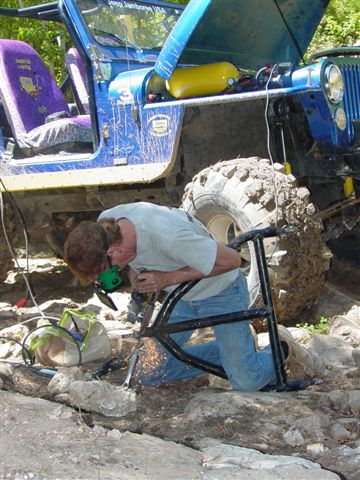 More than 50% of a good weld is preperation!
This Jeep eventually went on its way to finish the grueling trail. 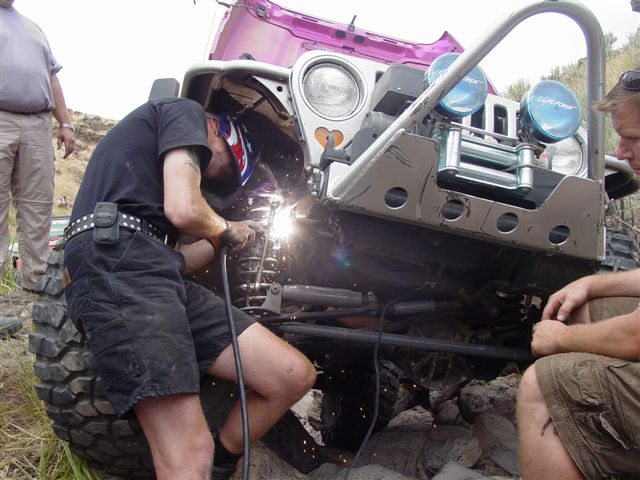 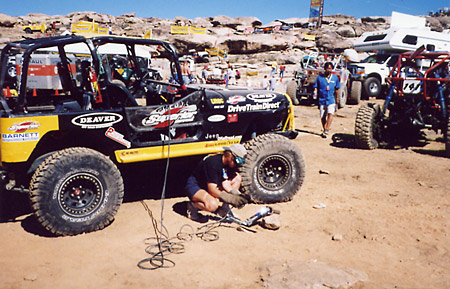 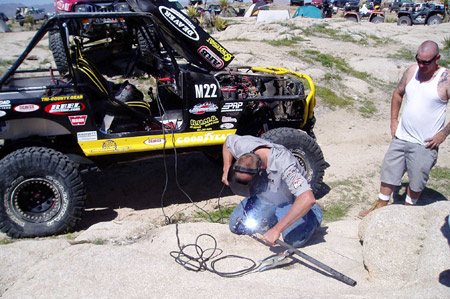 Having an on-board Premier Power Welder gave this competitor the ability to perform the repair to this broken tie rod at a national rock crawling event, which enabled them to finish the competition. 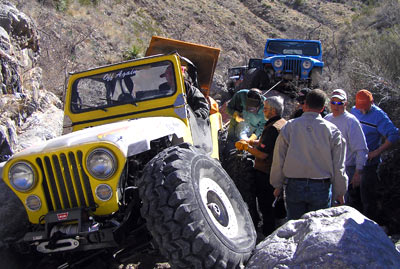 Nancy Bailey broke a radius arm on the trail called “War Path” in Caballo State Park, NM. Pat from Premier Power Welder repaired the break and our group was back on the trail again in no time!” 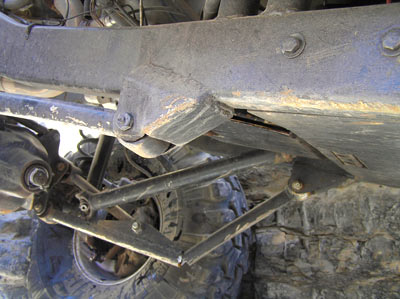 Even the best of them break sometimes! Walker Evans is shown here being welded by Ned Bacon and the "Killer Bee" in Johnson Valley, CA 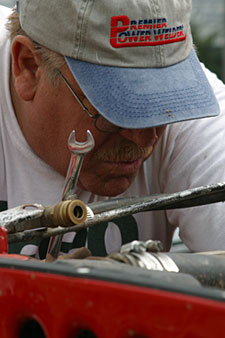 Randy Stockberger of Southern California, took time out Tuesday to repair his customized Jeep CJ, while the rest of his "All-4-Fun Week" participants headed to the hills. Approximately 700 people are in Gunnison this week for the four-wheel-drive rally, which is sponsored by the Mile-Hi Jeep Club of Denver. Stockberger's engine is outfitted with special parts that convert into a welder and an air compressor, because you never know what you might need when four-wheeling. "We never leave anybody behind," said Randy's wife, Roxann.
Photo by: Chris Dickey, Gunnison Country Times newspaper, July 28, 2005 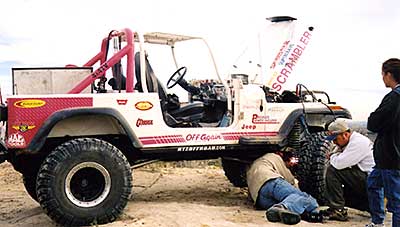 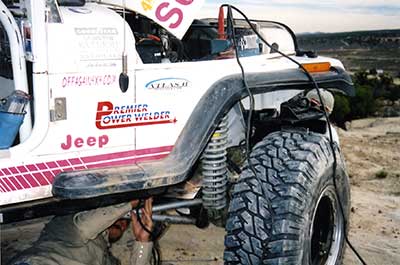 In this womens ARCA Rock Crawl, the Off Again Jeep needed the arm attachment point welded. 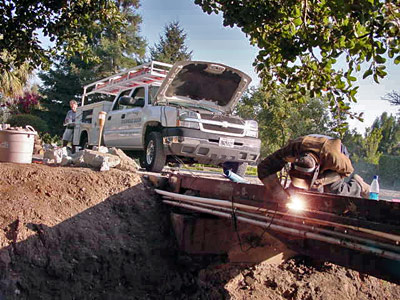 This is one of our customers that uses his welder every day! Here is a pic of him welding a bridge together. The Premier Power Welder can be used in a wide variety of situations! 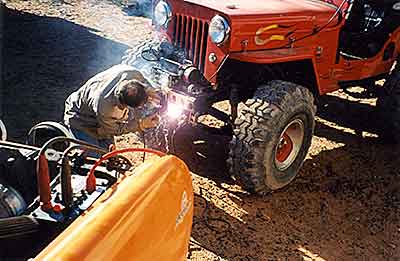 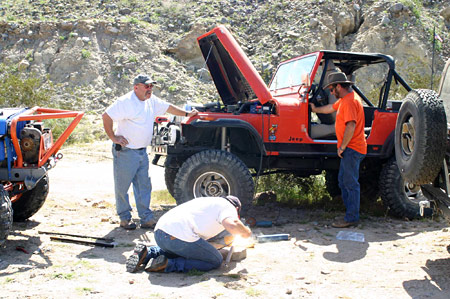 Another one of our customers coming to the rescue of a wheeler in need at the TIERRA DEL SOLE event -- saving the day for this guy! 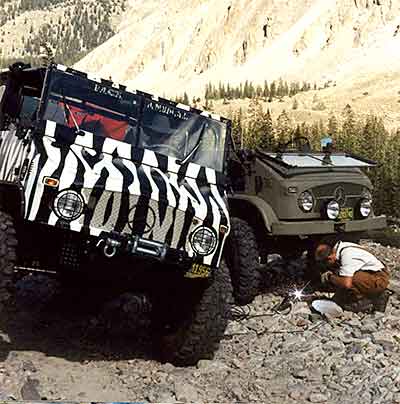 Even Unimogs need a Welder!

ARCA CRAWLER SWEARS BY IT 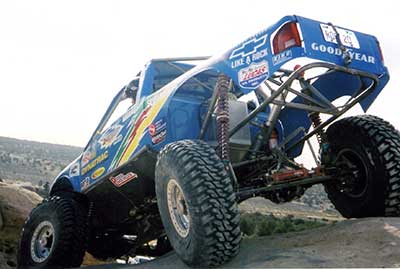 Walker Evans running our sticker at a ARCA event. He recommends the Premier Power Welder under hood welder. 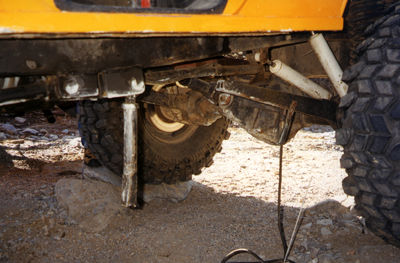 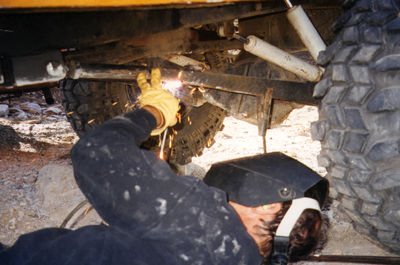 Pat welding his radius arm so he could finish the event. 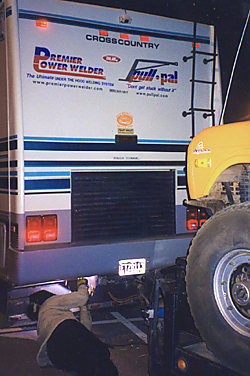 Salt Lake City, UT
On the Way to Vancouver, Canada -- "Island Rock Crawl"
When buying a camper or motorhome, always check the trailer hitch! Ours looked good, but a week later, it ripped off and we almost lost the Bronco and the trailer. We had to weld it back together in a parking lot. Again, Premier Power Welder saved our butts. 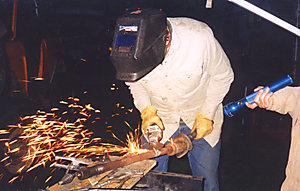 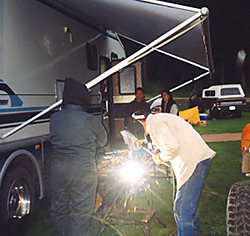 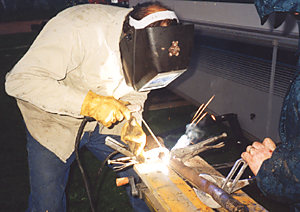 FINAL PRODUCT
Richard broke his axle so he was done for the rest of the Dakota Challenge '99.Pat cut down a Dana 60 for him & welded it so Richard could go out on the trail the next day. 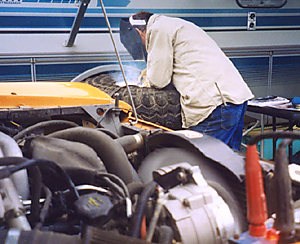 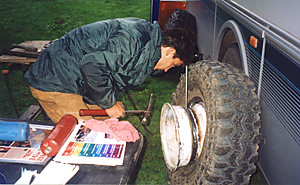 The homemade rim was coming apart at the "Dakota Challenge." Pat had to reweld so they could go back to the trails. 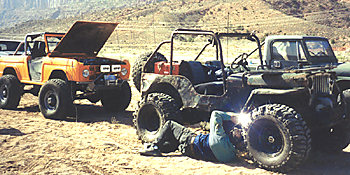 JP Magazine
Pat started welding Rick Pewe's Jeep early that morning. We only had 50 lbs. of weld rod, so we couldn't finish the job. We told him we'd finish it next year.